3. Direct measurement of force and displacements

4. Load-settlement diagram as direct output without a stress wave analysis (no signal matching)

Rapid Load Testing is a method were a pile is loaded in a short moment, giving a gentle push on the pile top. This method is much faster than static load testing. The duration of the load is much longer than during a Dynamic Load Test or PDA. Due to the long duration of the load, no stress waves phenomena are involved. When the requirements of the quasi static situation are fulfilled, the interpretation of the Rapid Load Test results are straightforward, without stress wave analysis and without Signal Matching. As a result, the results of Rapid Load Tests are more accurate, reliable, and man-independent.

StatRapid is the quasi static, high strain test method for determination of the bearing capacity of foundation piles. Within the StatRapid test method a drop weight is dropped on a special designed StatRapid cushioning. Due to its special characteristics, the kinetic energy of the drop weight is transferred in a relative long duration push on top of the pile. StatRapid is based on the Rapid Load Testing method, and therefor combines all benefits from Static and Dynamic Testing: A StatRapid Load Test requires limited time, lower costs and yields high accuracy results.

StatNamic has been developed in the 80’s of last century, and was the first test method for Rapid Load Testing. The method is based on launching a mass from the pile top. Using the Newton law’s, for Force = Mass * Acceleration and Action=Reaction, the StatNamic test device gave a gentle, short push on top of the pile. Long enough to avoid stress wave phenomena.

The StatRapid device is available with weights of 40 and 300 tonnes and more. Leading to testing load up to 12 and 90 MN and more, depending on the soil and pile conditions.

Each device consists of a basic frame including load cells, the special for Rapid Load Testing designed cushioning, which is modular both in number of spring elements as in stiffness of each spring element. The upper frame includes the hydraulics for lifting and catching and the test weight. The test weight is also modular. Weight can be added or removed in order to optimise the setup for each pile, depending on soil conditions and on the required test load.

Relationship between drop heigth and test load will be determined prior to the tests, using AllWave-RLT. This program, as part of the AllWave Software Package, simnulates the Rapid Load Tests, incorporating all possible influences from pile, soil and testing setup. 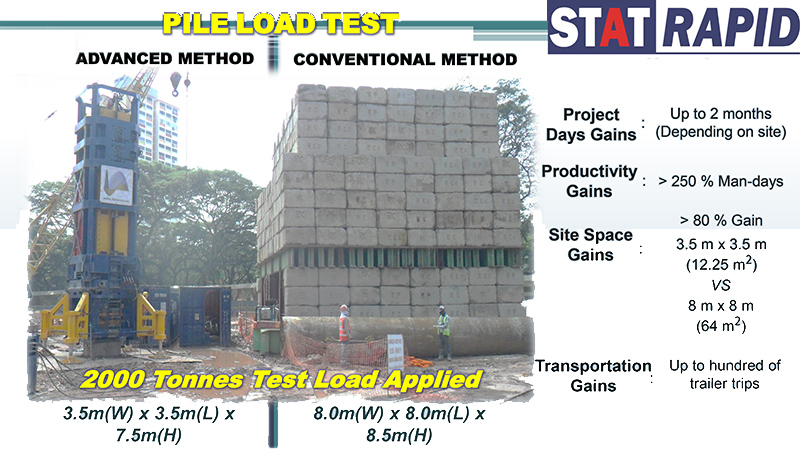